This clean 1969 Chevrolet Corvette Roadster is currently powered by an anemic small block Chevy and shifted with a factory 4 speed manual transmission. The combo is cool, but the owner wants to add more zip to this machine so he elected to go with a GM Performance Parts LS3 crate engine with Holley EFI and a Tremec T56 6-speed manual. Follow along as the V8 Speed & Resto Shop crew complete this transformation and add some additional upgrades from Detroit Speed, Wilwood brakes, and YearOne wheels. 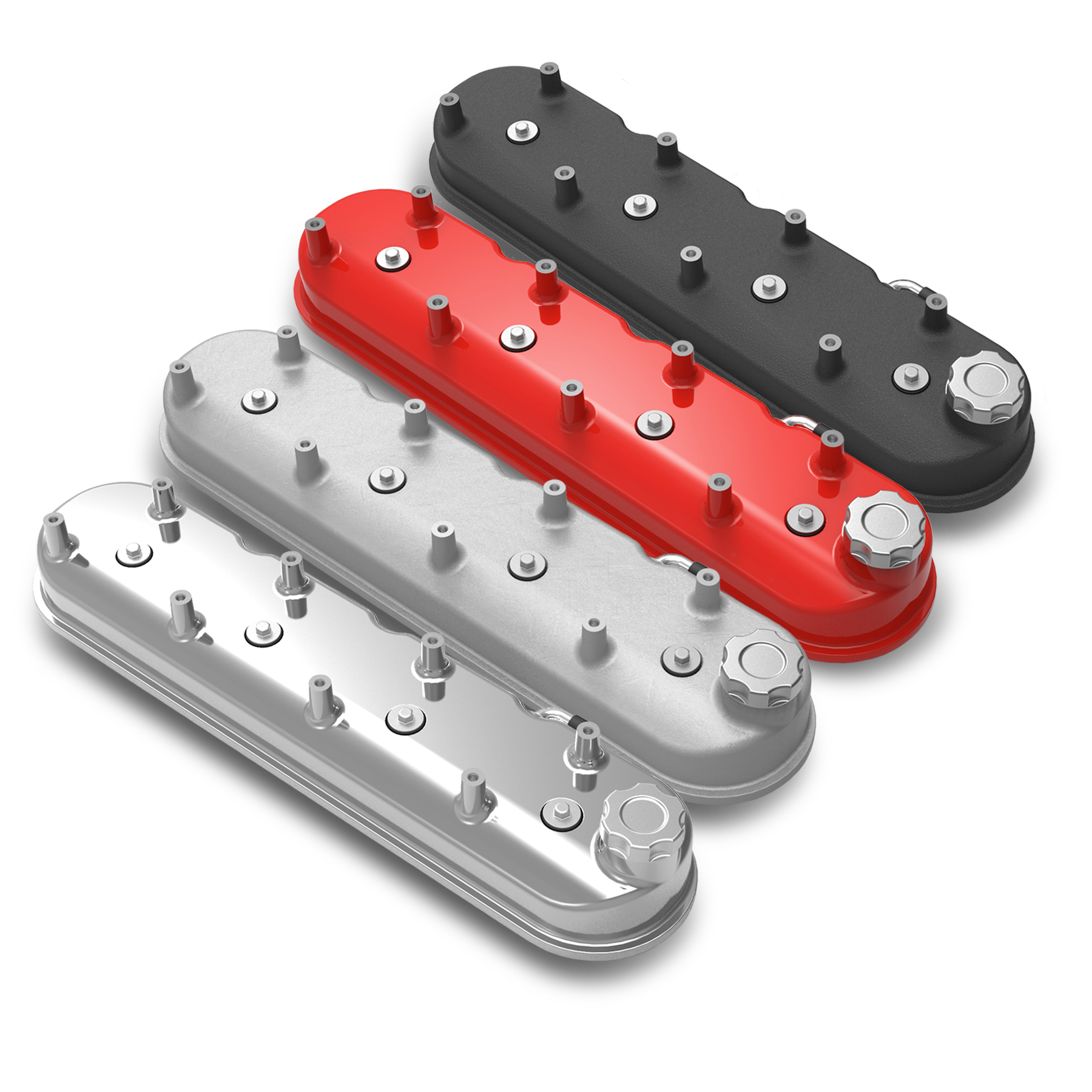 Holley Performance Products tall LS valve covers are the latest addition to our extensive line of GM LS engine components that will add a custom touch to your engine bay and help you to stand out from the crowd. These valve covers were designed to add an additional 0.54” of internal clearance over factory height valve covers. The valve covers retain Holley’s signature integrated angled coil mounts, and the hi-tech look and performance of coil-on-cover applications. The Holley tall LS valve covers fit LS1, LS2, LS3, LS6 and LS7 engines using coils with a standard LS3 bolt spacing of 72mm. These valve covers come ready for installation with an OE style baffle and ventilation system, lengthened factory style mounting hardware, plus a billet aluminum oil fill cap.  Installers are encouraged to reuse or replace the original gaskets specific to their application.

The Holley tall LS valve covers are die-cast to ensure high quality and detail. They are offered in four finishes to best fit your individual style.    See more at www.holley.com.

These Ford Racing cast iron exhaust manifolds are perfect for those building hot rods or just replacing their stock manifolds. Ford Racing designs these manifolds to hug the block, making them perfect for cars, trucks, and hot rods with limited clearances under the hood. The castings use the best materials possible to resist cracking or warping and are optimized to maximize flow to help your car make the most power possible with a smooth power band. When it comes time to get your car on the road, you can trust Ford Racing and these cast iron exhaust manifolds. 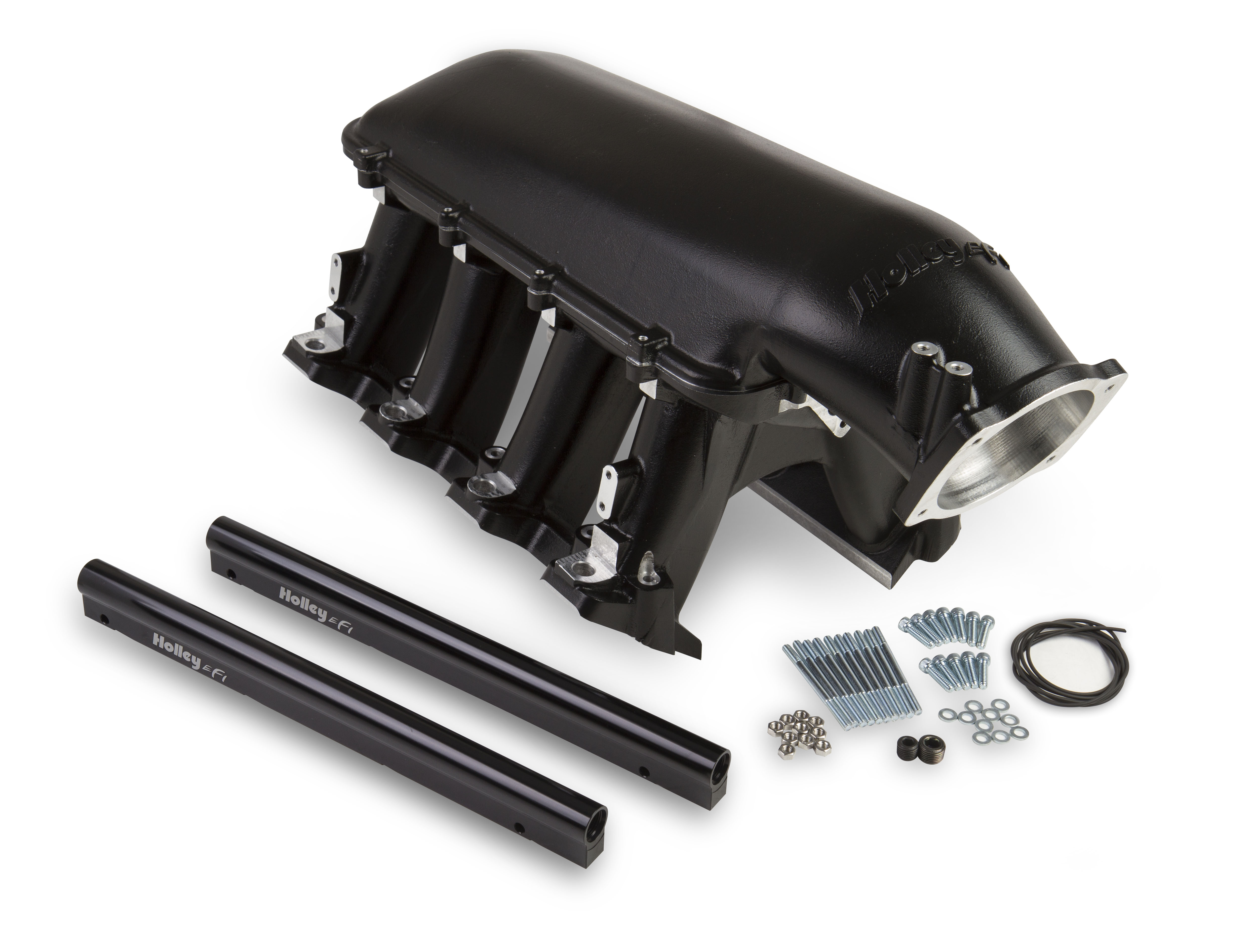 They say black is the new chrome. If so, Holley just added the right amount of shine! Holley is proud to introduce several

of our popular Holley and Weiand intake manifolds in our all new Carbon Black Ceramic Coating! The coating provides an aggressive yet subtle look that goes perfectly with the understated build styles that are popular today. Plus the coating provides the added benefits of corrosion protection, heat resistance and ease of cleaning!

Vintage racers, competition junkies, and machining enthusiasts trying to save weight: Give your engine the edge. Crafted from 6061-T6 aluminum alloy, these valve covers have successfully endured rigorous testing, proving that they are built to last. The incredible ability to withstand the harsh elements of racing makes these the perfect solution for street rod and racing applications. They are individually pressure-tested. Fasteners included. Offered in silver anodized, polished clear anodized, and black anodized finishes. Contact PRW for additional details on these parts and ask about custom engraving at (866) 264-8835. Visit:https://www.prw-usa.com/products/valve-covers/ford .

The Original Doug’s Headers announces the release of a new Long Tube Race Style header for the new Ford Coyote 5.0 motor swaps in 1964-1973 Mustangs, 60-65 Falcon’s, 66-67 Fairlane’s, and 67-68 Cougars. These headers were designed to be used with front IFS conversions kits from TCI or similar designs. They are designed to work with either standard 6 speed manual transmission or the 6 speed select shift automatic.

3/8” thick Flanges and 1 ¾” tubes with a 3” collector that feature a Stainless V Band clamp system give these headers the High Quality that you have come to expect from Doug’s. They come standard with a polished high luster heat and corrosion resistant Metallic Ceramic Coating for a rich appearance and long life.  These headers come complete with reducers, 1100º F rated gaskets and premium installation hardware.  Headers can also be ordered uncoated. Header kits come complete with Premium Quality Gaskets, Special Design Header Bolts and Washers, as well as the 02 Sensor extensions. 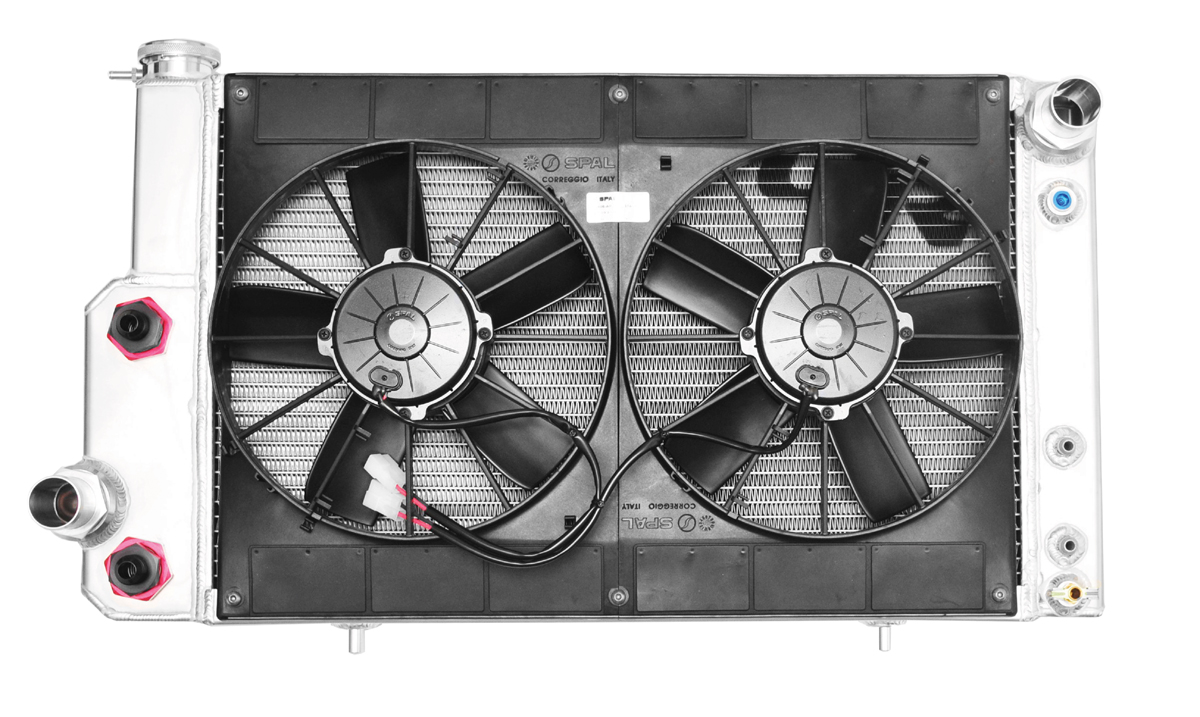 C&R Performance now offers the 1967-70 Mustang owners a true high performance cooling system for the 5.0 Coyote & small/big block engines. With features such as cross flow design, Spal dual 11” fans, billet radiator cap, thread in inlet and outlets allow for slip on hose or optional AN fitting to be used. Model shown here as optional engine & power steering coolers. Will also be available without oil coolers and with a transmission oil cooler. Perfect for crate engine swaps. Also features a very unique mounting system that is not clearly visible and uses factory upper core support mounting holes which offers a very clean and tidy fitment. Engineered and handcrafted in the USA. 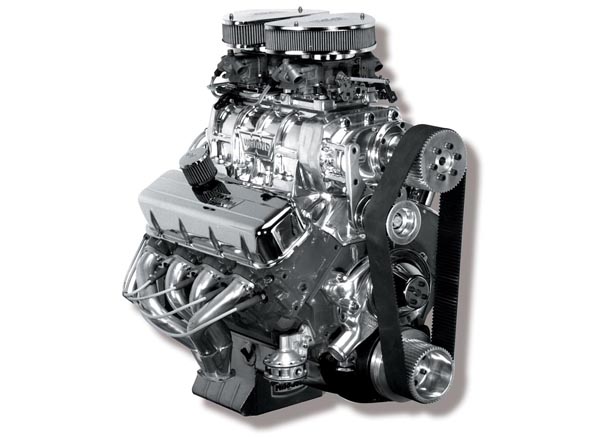 If it’s maximum power you are looking for, check out the 8-71 series! Built utilizing all new cases, end-plates, manifold and snout and reconditioned GM 3 lobe rotors for peak performance under demanding, high RPM conditions. 8-71s are engineered to produce 10-12 lbs of boost on small blocks and 5-7 lbs on big blocks (depending on application and engine efficiency).

These superchargers are for the hard core enthusiast! All 8-71 marine kits are equipped with the extra tough 8mm (two piece billet snout) belt systems for durability while on the street or water. They will accommodate 2 “V” belt pulleys. All kits can be used with some marinized engine accessories, but may require extensive modifications to bracketry or mounting locations.

All superchargers are built in Weiand’s state-of-the-art manufacturing cell and each supercharger is 100% boost tested to help you squeeze out maximum power & efficiency. 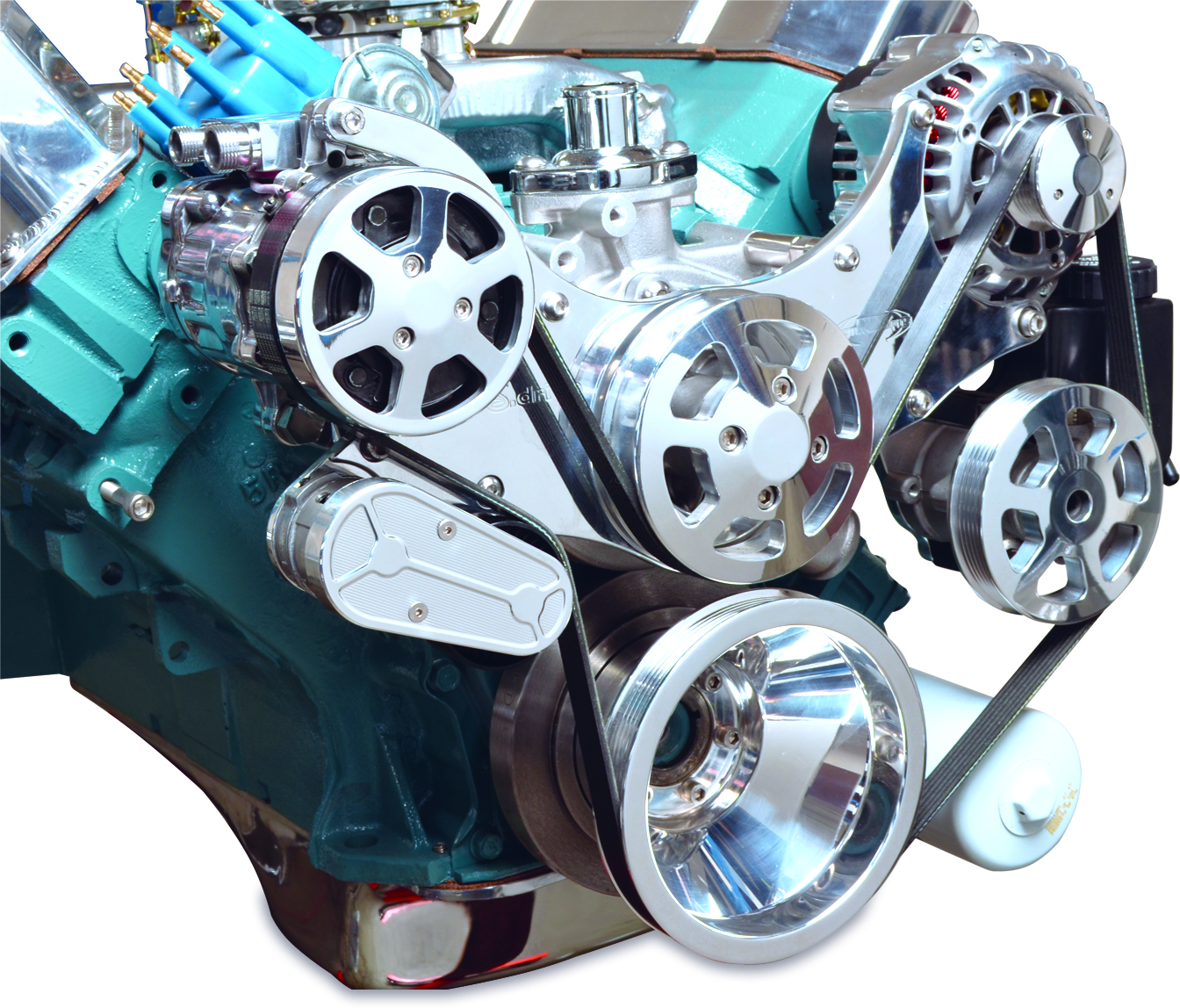 When you purchase an Eddie Motorsports S-Drive Serpentine Pulley System, one part number gets you everything you need to fully accessorize the front of your engine. The kits will equip your engine with an ultra-reliable, single, six rib serpentine belt system that is easy to install and they are absolutely stunning to look at.

Eddie Motorsports has recently introduced their newest S-Drive Serpentine Pulley System for Big Block Mopar engines 383-426-440. The compact drive systems are American made and come complete with all of the necessary billet aluminum pulleys and mounting brackets that are CNC machined from 6061-T6 aluminum by Eddie Motorsports in their Southern California manufacturing facility. The Mopar S-Drives are the cleanest looking systems on the market and utilize a single spring loaded tensioner to keep the serpentine belt properly tensioned at all times; there is no need for multiple, unreliable, idler pulleys to clutter up the assembly.

Nothing is easier than bolting on a carburetor. Holley's dual plane carbureted intake for GM's LS Engines will help you get on the streets quick!  Its dual plane design makes it perfect for low end torque, yet it still pulls all the way to 6,500 RPM! Our O–ring cylinder head mounting flange gaskets provide an OEM style seal and make installation a snap. Bolt one on today!
Installation Notes
Fits all GM LS Gen III or IV engines equipped with LS3/LS92 style rectangular port cylinder heads. Includes mounting bolts & washers as well as pipe plugs for Manifold vacuum and MAP sensor ports.
NOTE: These Dual-Plane Intake Manifolds are NOT legal for sale or use on engines with pollution controlled equipment. Edelbrock is excited to begin shipping the highly anticipated E-Force Supercharger system for the C7 Corvette Stingray. The all-new design increases the stock 6.2L LT1 (Gen 5) engine up to an impressive 624 flywheel horsepower and 600 ft-lbs. of torque.

This supercharger incorporates the Eaton® Gen VI 2300 Twin Vortices Series (TVS) rotor assembly, as well as an air to water twin intercooler system and dual core heat exchanger. Performance has been optimized through a unique runner design and an integrated bypass valve that helps reduce parasitic loss under light throttle, which improves gas mileage potential. All of this technology fits under the stock hood without modification to the hood, hood liner or cowl.